Courtney Sakellaris   is currently the Senior Manager for High Schools at Honest Game. She was the Assistant Athletic Director at Oak Park and River Forest High School from 2007-2021.Previous to her role as an administrator she was a coach and tutor at OPRF.

Courtney is a 2000 graduate of the University of Rhode Island where she played field hockey under Rebecca Provost. She started her first two years in the backfield and midfield before playing primarily in the midfield. She helped lead her team to competing in the Atlantic Ten championship  game both freshman and junior year.

Courtney is a graduate of Oak Park River Forest High School where she excelled at both field hockey and soccer. She earned First Team All-State honors in field hockey and helped lead her team to a state championship and state runner up her junior and senior years. As a soccer player, she was named to the West Suburban All Conference team twice ,  earned All–Sectional honors and was the team MVP.

Courtney resides in Oak Park with her husband Nick and their three children. She is passionate about growing the sport of field hockey throughout Illinois and helping athletes grow to their full potential. 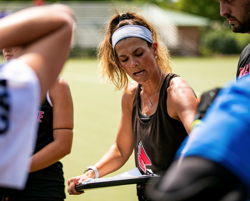 Stephanie Bernthal comes to RISE with more than 11 years of collegiate coaching experience, and most recently as the Head Coach at Ball State University for the past four years.

Along with her collegiate experience, she has many years of experience working in the club spaces, as well as running two sites for the USA Field Hockey Futures (Nexus) program, including both a Futures Elite (Level 1) Site and a Level 2 site for Region 8 (South).

In addition to her coaching experience, Stephanie has vast knowledge in the collegiate admissions process having served as a Collegiate Enrollment Counselor and is also a Licensed Professional Counselor with an extensive background in mental health.

After being awarded the Female Scholar Athlete of the Year as a high school senior, Stephanie secured a scholarship to attend Kent State University (KSU) as a member of the field hockey team. Leading her team to 2 Mid-American Conference titles, Stephanie had an incredible impact on her team. She started all 4 years in the backfield and was named co-captain her senior year - helping to lead her team to a Top 20 ranking and a NCAA Tournament bid. While at KSU, Stephanie received All-MAC honors twice, as well as being named a Regional All-American honors once and was Co-SIDA All-District for Academics.

Graduating in three years academically, Stephanie began her Master Degree in Clinical Mental Health Counseling her final year as a student-athlete at KSU. She also earned a Master of Education Degree, while simultaneously earning licensure in the State of Ohio as a Professional Counselor.

Courtney Clark is a graduate of Miami University and has her USAFH Level 1 Certification. She was team captain, MAC Academic Female Athlete of the Week and the Leanne Davidge Grimes Award Winner.

Courtney was a successful student athlete at Pioneer High School in Ann Arbor, Michigan. She led her field hockey team to back-to-back state titles in 1994 and 1995., as well as a 4-year letter winner in lacrosse. After college she returned to her alma mater and assisted Pioneer in another State Championship as an assistant coach.

She is our current U19 travel coach with Courtney Sakellaris.

Courtney has served on the Board of Directors for Evanston Youth Lacrosse, as well as coaching for EYLA from its inception of the girls program.

She currently resides in Evanston with her husband and their four children.

Barb has several years of coaching experience at the youth and elite level. She has coached for the USA Field Hockey Futures Program, as well as at the UConn and Northwestern University summer field hockey camps.

A four-year letter winner at the University of Connecticut, Barb served as co-captain her senior season, helping to lead the Huskies to the NCAA Final Four. During her time at UConn, she was a 4-time Big East Conference Regular Season Champion, 3-time Big East Conference Tournament Champion and played in 3 NCAA Tournament appearances, helping lead the defensive unit to a top 3 national ranking several years in a row. Post college, she was a member of the Greenwich Field Hockey Club in New York.

A native of Oak Park, Barb was All-State, Team Captain and Team MVP at OPRF High school.  She currently resides in Chicago with her husband and three children.

Monica resides in Naperville with her husband Brad, her daughters Abigail and Sophia and her son Cal.